The Power of the Spoken Word: Debate in the English Classroom 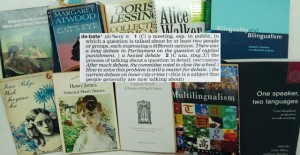 Once again the Department of English Language and Literature at Oranim has organised a Debating Conference. This time on 15 November Mr. Elias Farah, the Vice-Principal of Saint Joseph Seminary and High School at Nazareth, and a graduate of the department, showcased the Model United Nations (MUN) debating activities he has been running for many years at his school. To do so, he brought along three graduates and fifteen pupils who, through their performance, confirmed the importance of debating to enrich vocabulary, increase fluency and perfect writing as Elisheva Barkon, the Department Chair, and Danielle Schaub, the Conference Organiser, conveyed in their opening words.

Elias Farah opened the first session by reviewing the creation of the United Nations and its principles before clarifying when and how the MUN debate began. Thereafter he shared his knowledge on how to prepare a debate, insisting on its multiple educational, personal and communal benefits as well as recalling how he had set up a debating club at his school, how it had evolved and how, to eliminate potential bias on account of personal prior acquaintance with pupils, he had eventually left the selection of club members to his graduates. He then reviewed the outstanding successes of his pupils at national and international competitions, sharing some anecdotes from past events. Questions from the audience proved his generous devotion to the project and the need to secure sponsors to finance participation in national and international competitions. 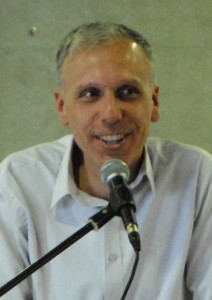 Elias Farah then gave the floor to Ali Darawshi, Rami Hanna and Noor Athamnah, three of last year’s graduates. Ali poignantly explained how debating changed him from a shy adolescent into an eloquent speaker, demonstrating his verbal ease with both rich vocabulary, adequate sentence structures and body language. His speech amply conveyed the security he has acquired thanks to his years of involvement in the debating club. 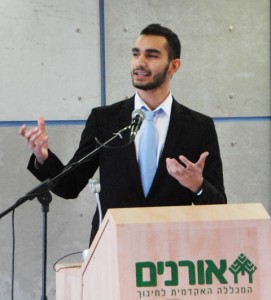 Then Rami impressively specified the MUN debate rules, its procedures with formal speeches and answers to questions, with the various motions and points, defining terms unfamiliar to the audience, such as motion to divide the house, motion for a roll-call vote, caucusing, points of order, point of inquiry, point of personal privilege, point of information. 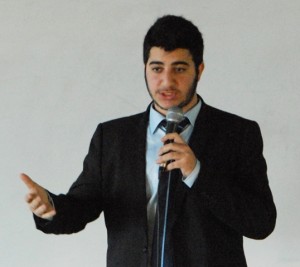 Noor then articulately formulated the rules governing debate resolutions characterised by preambulatory and operative clauses and phrases. She gave many examples, explaining draft resolutions and the need to gain the support of sponsors for the committee to agree on formal submission for debate. She also elaborated on the procedures followed once resolutions come to the floor for debate. 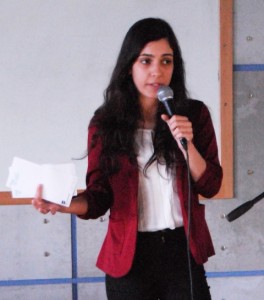 In the second session, Elias Farah’s pupils from the tenth, eleventh and twelfth grades debated the subject of “Organ Trade” in a stellar performance. Each pupil acted as the delegate of a specific country on which he or she had conducted ample research to state policy on the subject while Ali, Rami and Noor chaired the debate making sure all the delegates complied with MUN regulations, calling the delegates to order when necessary. After deciding on the roll call, the chairs called each delegate in the predetermined order to present in no more than one minute the policy and recommendation for action of the represented country. To secure a smooth procedure, the chairs knocked once to let delegates know they had another 20 seconds to speak and twice to signal that time was up.

Once each delegate had finished speaking, one of the chairs asked the other delegates if they wanted to make statements or ask questions. Delegates keen on speaking raised their placards with the name of their country and the chairs announced which delegate/s could do so. Showing eagerness to participate and make their points heard, the delegates raised their placards vividly like so many national flags.

Following the argued positions, the third session allowed the audience to witness the debating resolutions with several motions to vote on for adoption. After the presentation of each motion, delegates and the audience asked questions or made statements. Students and staff alike participated in a lively fashion. Also keeping the entire audience alert, the final vote for or against any motion was open not only to the delegates but also to the audience. Raised hands in the entire auditorium showed the level of agreement with the resolutions presented.

Finally, Danielle Schaub thanked Elias Farah, his graduates and pupils for the inspiring debate they had run and for proving the benefits of debate in the English classroom. She noted that, as proof that one can become proficient as a non-native speaker and even excel at it, the participating graduates and pupils had obviously immersed themselves in English material while researching the position to defend at a debate, thereby enriching their English vocabulary and achieving fluency. While reiterating the importance of mastering rhetorical skills for efficient teaching, Danielle encouraged department students to introduce and run debates in their own English classrooms and to compete with Elias Farah for excellence, thereby echoing the opening words celebrating the benefits of debating.

Text and photos by Danielle Schaub